My plan required another 5 km tune-up race before the goal 10 km at the end of November. Just like the previous tune-up race, I failed to find a 5 km race that satisfied my constraints, but managed to find a 4 km instead. The race was on Friday 11/11, Armistice Day. The race name translates as “Jogging of Peace”. Extra bonus: I knew Laurent, who beat me in our sprint for spot seven in the Brussels Canal Run, would take part in this one. I hoped for a bit of a rematch.

Three weeks had passed since the Brussels Canal Run. Two high weeks immediately after, followed by a recovery week with the race on Friday. The first of those two high weeks once more broke my record for most distance in a week: 73.9 km. Another 1.2 km extra over the record I had set just prior to that race. The second week should have been even higher, but I backed up a bit to save my right calf. My muscles were pretty sore the day after the Canal Run and while most of it fixed itself afterwards, my right calf remained incredibly tight. I spent a lot of time massaging and foam rolling it, but the tightness remained. So for the second week I backed off on both intensity (dropping the workout parts) as distance (cutting about 4 km). That week ended at 71.6 km.

The week of the race had a mini taper. This consisted of 11 km on Tuesday and 5 km on Thursday with some strides. The race was on Friday. Luckily, this mini taper also fixed the tightness in my right calf. By the time race day came around, the tightness was gone completely.

The race starts with 500 metre flat-ish. After that a slow climb starts, climbing 30 metre over 1500 metre and putting you at the halfway point. Then comes a quick drop followed by about 150 metre upwards at 7-8%. After that you are in the clear, cruising downwards for 1400 metre to the finish line.

Most of the course is on the roads, with a brief stint of 400-500 metre in a forest at the halfway mark.

I did not come into this race with a particular time goal. Given the elevation, I also was not 100% sure how to pace myself. I was happy with taking this as a rematch against Laurent, so I figured I could just use him as a target. He has done this race often before, so he knows how to pace it and we are similar enough on short distances. I was wary of the hills in the first half of the race though, going too hard on them could be paid dearly in the second half, even if the second half was mostly downhill.

The girlfriend and I jogged to the start as a little warm up (it is about 5 km from where we live). We signed up for a whopping €3, the first time ever I signed up for a race the day itself. They did not have sign ups beforehand, as far as I was aware. This was a bit hectic as they also ran out of safety pins right after we managed to grab hold of the last few. The rest of the people were rescued by means of… duct tape. What can it not fix?

The 4, 8, and 12 km all started at the same time. We figured since we were doing the 4 km we could probably start at the front. However, a bunch of kids decided to line up right at the front. Not the athletic looking kind, mind you. We figured they would sprint the start too fast (faster than us) and then fade away quickly, so we did not bother trying to get in front of them.

The kids did indeed sprint as soon as we were off. I managed to start rather controlled, better than I do usually. I saw Laurent pass me (he started a row behind me) and immediately latched on to him. I did leave a few metre between us as this was still “weave through everyone” time and you want to see what exactly is in front of you. About 150 metre in some guy shoved himself next to me and then in front of me. He was wearing a baseball cap in reverse that said NYPD. I found it rather rude, especially because he did not actually continue going faster once he was in front of me. After 300 metre I was sick of the crowd and hopped to the empty side where I could pass people without weaving or pushing. Meanwhile I kept my eye on Laurent.

Once at the 600 metre mark, the climb was starting and I wanted to keep it easy enough. Laurent was however slowly pulling away. I hesitated briefly, but decided to let him go. This is also the point where I think I passed the last of the kids that started at the front.

I kept things controlled, still fearing blowing up too badly. Right before the forest one guy and then another passed me, but I stuck to my own pace. Then the uphill ended and I zoomed past both of them on the downhill before the short upward climb that was to follow. On that upward climb, one of them (in some bright green clothing) comes next to me again. We crest the hill together and I decide to just tail him for a bit.

After a few 100 metre of flat-ish and just over 1 km from the finish, a real downhill part starts again and I let my longer legs carry me past and away from him. I realise the finish is drawing near, but I am still feeling way too fresh. I took it too controlled on the uphill leaving me with more energy than I can spend on the slight downhill to the finish.

With 500 metre left, I checked behind me and saw I had a sizeable gap that I would not lose. Sadly the same could be said ahead of me, I would not be gaining a spot before the finish. I somewhat let loose and just cruised towards the finish line. On the way there I spot a photographer on the side. Having plenty of energy and no worries about time or place, I did the moose. 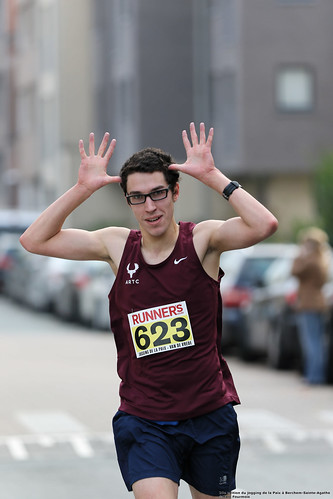 Well, it felt like I took things too easy and that showed in the results. I finished seventh in 15:10. That is about 50 seconds slower than three week prior at the Brussels Canal Run (though this was a much hillier course). As a better comparison: Laurent finished fifth in 14:41. The rematch that wasn’t. Maybe I should have just tried following him. Blowing up be damned.

The NYPD cap guy from the beginning finished in 18:06 as 29th. The guy with the bright green clothing (at least, I think that was him) finished the 12 km as seventh in 46:49 which is of course a bit more impressive than my time. None of those overeager kids finished close to where they started.

The girlfriend for once did not win. She finished the race in 17:14, also having taken it a bit too easy. This was good enough for second place, the winner running it in 16:07. At first there was actually some confusion about the female ranking as a bunch of younger guys apparently found it funny to sign up as females. Ha. Ha.