The year 2015 is past us and like many I believe this demands for a look back into what went right and what went wrong. In my case, it can be summarised as good-bad-good, visualised in this graph of weekly distance ran. 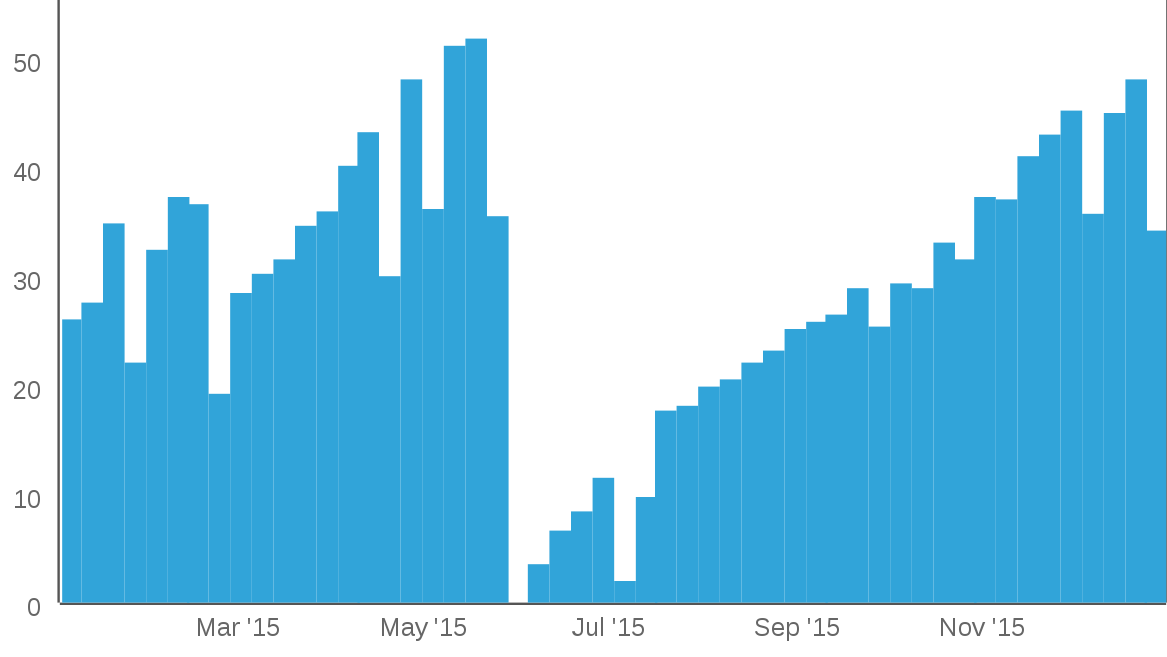 Having ended 2014 with some consistency, I started 2015 by looking into some actual goals. The short term one was to see where I was at for a 5 km, which I aimed to finish by the end of February. The longer term one involved running the 20 km of Brussels to my satisfaction, though what would satisfy me was not yet determined at the time.

For both of these goals, I looked into existing plans made by actual coaches. However, being not very well versed in who or what to follow, I essentially latched onto the first one I bumped into that was available online: Hal Higdon’s Training Programs.

For the short term 5 km goal, I used his intermediate training program. It brought me from 21:43 on 1 February to 21:21 on 1 March. Both of these are simply Strava best efforts from a time trial I did against myself, they were not run in races. All in all, nothing special going on there. The more important consequence of using his training program is that it suddenly bumped me from three runs and about 27 km per week to five runs and over 35 km per week. In retrospect, that was probably a dumb idea and I can be glad I did not get injured right then and there.

With that behind me, I started focusing on the 20 km of Brussels which was to be my main goal of the year and the reason I started running at the end of May of 2014. I was satisfied with the 5 km plan I had used, so ended up with his half marathon intermediate training program for this goal too. This plan also called for some races, which I filled in by running the 10 km de l’ULB and the 15 km de Woluwe-Saint-Lambert. Both of these went well enough, filling me with more confidence for the 20 km of Brussels.

Around the start of May however, things started going badly. I pinpoint 2 May as the start of my injury woes and am still not 100% sure what it was that set things in motion. The night before the run of that day, I went out and drinking and ended up walking a lot. I started using new shoes then, a new pair for running and a two new pairs for every day use. The training plan had been ramping up the distance of the long run quite heftily (too heftily according to the girlfriend who is a staunch opponent of Hal Higdon’s plans). Likely it was a combination of all these things.

Not recognising the signs, I continued onwards with the plan and the Sunday before the race, things fell apart. After my long run that day, my right knee had had enough. Walking was painful for the rest of that day and remained throughout the week, especially on the few runs I tried. The plan called for them after all and I was not going to give up now. Come race day, things still hurt during the warmup, but I was too stubborn to not run the race and pushed onwards. Luckily things felt pretty good during the race, but afterwards I knew I needed a break.

I could not walk for a few days and eventually passed by my doctor to see if he had a clue. He diagnosed it as knee bursitis and said it would be over in a week with rest and some anti-inflammation medication. This turned out to take much longer and now, writing this text, I believe there must have been something else wrong as well, though I will likely never know.

In my downtime, I started cycling on the old hometrainer as well as doing strength work through the recommended routine of the Bodyweight Fitness Subreddit. After about six weeks of essentially no running, my legs were able to carry me through a run again, though I decided to play it as safe as possible and started all the way at the bottom of the ladder.

I started off with running three days a week: 30 minutes, 30 minutes, and 40 minutes. I stopped looking at pacing at all and just ran what felt easy. Every few weeks I would bump up the time I ran by at most 10%, counting over the entire week. Meanwhile I kept cycling, now by commuting, and kept up the bodyweight fitness routine.

Things were on the up again and the back of my mind started thinking about goals to work for as well. Most of my distances were pretty short still, so any racing goals would have to be limited to 5 km races, which was fine by me. I kept on slowly increasing the weekly distance and around the start of September switched to four days of running. My left knee was not always happy, but things were manageable.

While I had completely planned out my fall using the time based method, I changed things up at the beginning of November. I had just finished Pete Pfitzinger’s “Faster Road Racing” and the sound of a tried and tested plan seemed appealing again. I ended up starting about halfway through his lowest base building plan though decided that I should and would deviate from it if it felt like my legs needed the extra rest.

I think changing to it was the right choice, as it gave me some more structured runs than “go out and run at whatever feels good”. The plan has some tempo runs and expects you to hit certain paces during your long runs. You need to push yourself to keep on improving and I fear without it I might have skimped on the pushing and just done whatever.

The last full week of December was the last week of his base building plan, putting me at 48 km, just shy of my longest week ever which was 52 km in the week of 24 May. In the meantime I managed to sharpen my 5 km record to 18:01. I am glad to have been able to finish the year somewhat on a high note, it gives me confidence to start the new year.

Premade structured plans are nice, but listen to the cues your body gives you. You probably read it everywhere, but you do indeed need moments to rest. Be it a downweek (where you run less distance than in a regular week) or simply some days off. Do not ignore pain till it is too late.

Have a look at a calculator or data tables that give you information about how to pace different workouts. You might find you should push yourself much harder during a run than you have been and that it is actually not as awful as you thought it might be.

Be confident, but not overly so. I was already dreaming of a podium spot in my last 5 km race of the year, but ended up barely in the top ten, beaten by the young and the old. Setting goals is great, but do not assume you will easily get them or you might be too disappointed with the result.

I have by no means planned my entire year yet, so the next few months will be precise enough, but after that the goals get more handwavy.

The coming two months I hope to get used to having 50 km weeks. I will possibly dump in a 10 km race, in which case I would want to go sub 40. After these two months, it will be time to start training for the 20 km of Brussels which falls on 29 May. I will likely end up using Pfitzinger’s lowest half marathon plan for this one as his base building has worked reasonably well for me the past months. Ideally, I will shatter last year’s time, aiming for around 1h20.

After this, things become more vague and exact plans are lacking. I simply have the following goals for the entire year.