Earlier this year, I ran the 20km door Brussel. This race is the biggest race in Brussels and, I believe, the most well known running race in Belgium. It has first been organised in 1980 and as a kid I remember my dad participating in it as well.

With my recent participation, I wondered how I stacked up against his old results. He is, however, no longer around to ask and my mum did not know these details either. Heck, there was not even certainty which years he actually ran it. To add to the fun, the results have never been digitised so there was no possibility of simply checking online. All this resulted in a trip to the race organiser’s office to look through their paper archive.

I was sort of fearing having to spend ages to look for his name in a list of people sorted by their finishing times, but I was in luck. Back then I imagine it was pretty common to either call or make a trip to the organiser’s office to ask for timed results of some name (how do you live without the internet?!). As such, the results were all sorted alphabetically and finding names was actually pretty easy. Well, except for 1986 which sorted people by postal code and then within each postal code by last name. I think I tried all the possible locations my dad could have been in in that year and failed to find him anywhere, so I am reasonably sure he did not participate in 1986.

He did however participate every year from 1987 to 1999 (included), except 1994. Not sure what happened that year. I was hoping for some competition against his results, but as it turns out I already have him way beat on my first attempt, which ended in 1h30m41s and a 2833rd spot. These are his results:

While my idea of having a PR of his to aim for as a record to break cannot be executed, his times are not terrible. Within a race of 25,000 participants, he is definitely in the better half. As I write things out I wonder whether or not they had individual chip time back then. A lack thereof could screw up your time quite a bit I imagine, as the 20km has a terrible bottleneck at the exit of the park where the start is located. I am unsure how much of a difference that would make though.

What is noticeable in the results is that outside effects really can have a big influence on how you do. His worst time is in 1999, but his rank for that one is actually his fifth best. I would guess that might have been a pretty hot year and everyone was suffering or maybe the course was slightly longer then.

Either way, it was pretty fun to delve into some of those old results. I would advise anyone else in a similar situation to also make a small effort to find out those forgotten results. 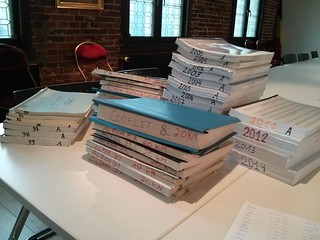 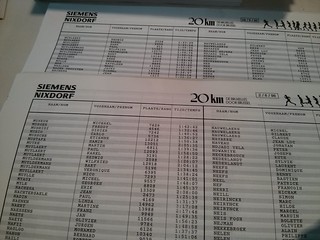